It’s been quite awhile since I’ve had a new, self-published design to share….and that makes “Asteri Scarf” special for me. The concept for this scarf was something I had thought about for a long time, and one I think makes for a fun scarf. I’ve seen lots of scarf, and cowl, patterns with buttons – but the buttons are in fixed locations. Why not make it so you can put the buttons wherever you want? By doing this, “Asteri Scarf” becomes something more. A cowl, a jabot, a tie, just use the buttons to hold the scarf together on either the inside or outside edges – creativity is what it’s all about!

The other design element that I think came together very well for “Asteri Scarf” is the stitch pattern. While I really like the “Star (Daisy) Stitch”, I wanted something similar but different. I swatched with larger needles, finer yarn – combinations of the two – but wasn’t getting the look I ‘saw’ in my mind. So I started playing with the stitch pattern. After trying several different combinations of decreases & yarn overs – I came up with the stitch I used for “Asteri Scarf”. It has the ‘right’ amount of openness, while also lending a impression of being 3-D. Plus it works for women and men! 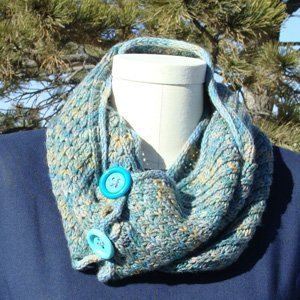 Another factor to consider when designing any knitting (or crochet) pattern is the yarn. The yarn can either make or break the overall design. For “Asteri Scarf”, I happened to have some Mountain Colors 4/8’s Wool that was perfect! Combining worsted weight yarn with a slightly larger than usual size needle produced the drape I felt was needed and still allowed “Asteri” to be a warm scarf. And the colorway had to work well with my stitch pattern…which I think it does.

I think you’ll like this pattern too! It’s now in my catalog and available for $5.00.