A Story, or Two, About Goats

In my last tutorial post I said I would tell you why I was late posting November’s tutorial. Well, it’s a goat story ~ or two.

Over the last couple of years we’ve acquired a small herd of myotonic (fainting) goats. Most of our little herd came to us a couple of goats at a time with a single addition here & there. Our small herd ranges in ages from 4 yrs old to 4 mos old. We also have only bucks, no girls. 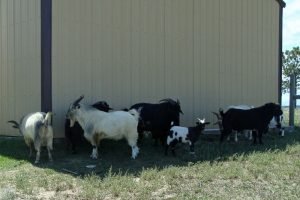 As the boys have gotten older, they’ve also gotten a bit more into the fall rutting than we’d like. After all ~ we don’t have any girls for them to impress. So, this year we decided that it would be better to ‘wether’ them, which is somewhat like neutering a male dog.

We made the appointment with the vet to bring all 8 of the intact boys in at once. On the appointed day, Nov 28th, our friends came over with their trailer and the four of us managed to get the goats straight from the barn into the trailer. Then down to the vet we went.

Over the next several hours we wrangled goats, one by one, into the office for weighing and their procedure. Ranging in weight from 145 lbs to 105 lbs, and much stronger than I am,  I could hardly move my arms by the time the procedure was over for the last goat. I also learned to be a vet’s operating assistant that day since it took 4 people to complete the procedure for each goat. (One monitored the anesthesia, one held a leg up out of the way, I held the other leg out of the way and the vet did the surgery). During this time my DH had to go take care of a service call for a customer and my friend Cheryl had to go home to meet other folks she had appointments with that day. So Cheryl’s husband Bill and I were left to help the vet. Bill monitored the goats as they recovered while I continued to help with each goat’s surgery.

All 8 goats came through their procedure just fine, and in another month or so will be much calmer boys. There is another little goat we had been thinking of bringing home, and the timing seemed right with the older boys spending some time recovering from their ordeal. That way no one would be overly aggressive with the little guy. And if the little guy wasn’t accepted into the herd we’d have time to make adjustments before the older boys began feeling better.

So….a couple of weeks ago we brought home Desmo…..a happy member of our herd now. 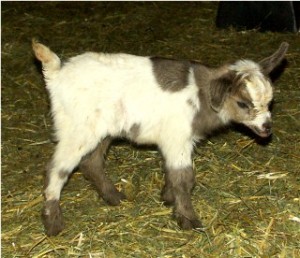 So what caused me to be late with November’s tutorial? It took me a few days for my arms & hands to recover from wrangling all the goats on the day of their surgery! Doing anything was a real effort ~ which I didn’t expect.

Now, we are just waiting for warm spring weather so we can give all the boys a bath & good combing. We’ll see how my arms do with that. 🙂

And look for December’s tutorial to be posted on time, as scheduled, on Dec 31st.